The theme for this week’s readings was ‘applied free culture’, but also, I think, culture in general, and who has the license to play with it. Here, I want to start thinking about what we mean by and how we participate in culture in the context of copyright laws. I’m also responding specifically to the ‘A Fair(y) Use Tale‘ video by Eric Faden, and the ‘Let’s Go Crazy‘ assignment by xtine burrough. Both of these pieces highlight the limitations of copyright laws (i.e., fair use), and try to push those limits further.

These readings really got me thinking seriously about culture and how it’s produced. They brought to mind a lot of ‘old-school’ Marxist sociology about how the economic structure informs culture, and about how culture is (in industrial and postindustrial societies) a construction of industrial and legal relations. Theodor Adorno and Max Horkheimer’s ‘culture industry’ thesis came to mind as well – the theory that the production of popular culture mirrors the production of industrial goods, that popular culture is an industrial good, cheap, reproducible and lacking in critique, because it is closely controlled by a small number of companies. But of course, Adorno and Horkheimer imagined a passive audience, and today we mostly don’t. And even though Lessig’s read/write culture is definitely a far cry from the culture industry and its reproducible (but never re-writable) pop culture, the lesson from many of the readings is that we have not come very far in removing the stranglehold of industrial-capitalism from culture and how it’s produced. 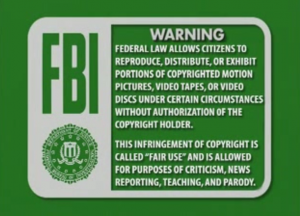 A remix of the FBI copyright warning

Given this stranglehold of culture by the Walt Disneys of the world, what can we do in our roles as both culture-makers (or critics) and as teachers? How can we promote the accessibility of cultural products to ourselves and our students without necessarily putting them in the trenches of Jack Valenti’s copyright wars? Class is of course a part of this – poor students are not expected to be actively engaged with culture-creation, which is not unconnected to the debate around copyright. And just like cultural-production, culture-hacking can be a largely male, white, upper/middle-class phenomenon.  So, how can we encourage our students to think about culture as something they can play with and hack, or even create? I think that both Eric Faden and xtine burrough do just this type of work (while also exemplifying the class distinctions that make the work possible) – Faden uses clips from Disney movies to explain copyright laws and fair use (where the video itself is an example of fair use because it is both educational and a parody of Disney), and xtine burrough creates a class assignment that makes use of a court ruling in favor of the fair use of Prince’s ‘Let’s Get Crazy’ song as background music in personal YouTube videos.

But is this enough? Does fair use have to be limited to “purposes of criticism, news reporting, teaching and parody” only? What about cultural production – i.e., building on previous work and making new cultural goods? Could this be the reason the humanities (and the social sciences, to a certain extent) have put most of their energies toward critique (and parody sometimes), but not so much toward creation? How would learning (and teaching) be different if students were allowed to build on current cultural products and make them publicly available?

Need help with the Commons? Visit our
help page Send us a message

Built with WordPress Protected by Akismet Powered by CUNY